In our 6th edition of Jstar’s Chronicles, we go over my feelings on the Nintendo Switch event last night, along with my take on the Amazon Echo.

Nintendo finally gave a detailed look at their next video game home console, the Nintendo Switch. It’s been hyped up for months (especially since it’s October name/hardware reveal), following off of tons of rumors, speculation, and a whole lot of leaks. Now that it has finally been revealed, we can go over what they actually revealed to the world.

Here is the full list of all upcoming Nintendo Switch games below (these are officially by Nintendo, while other games like Binding of Isaac are also on the way). 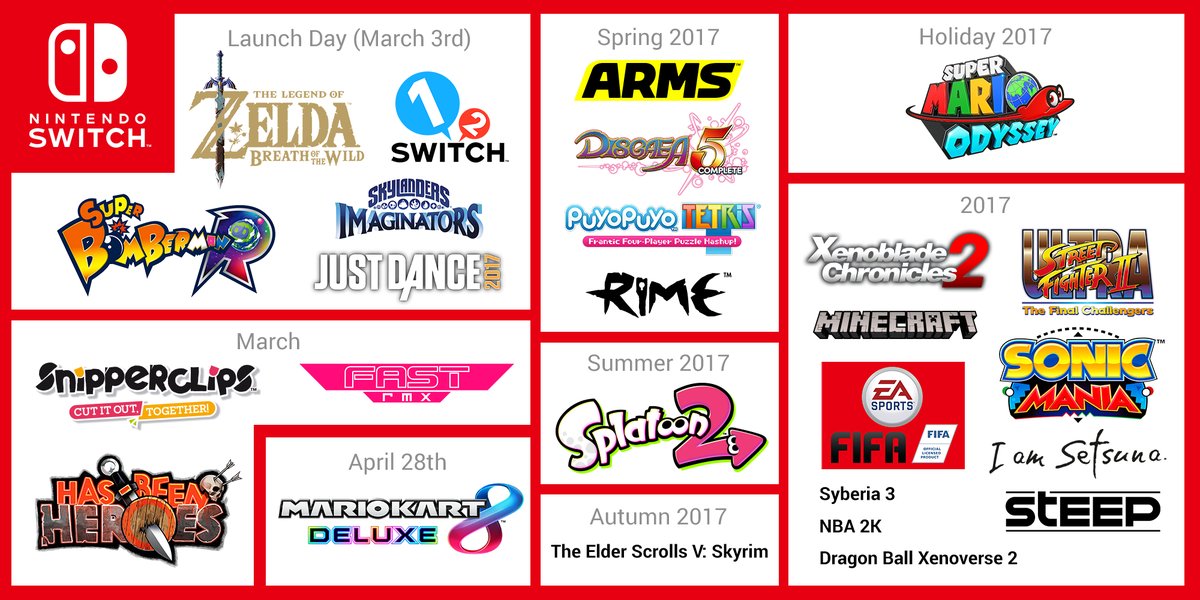 They also announced a new Super Mario game where you can walk around in new worlds, including one that’s similar to New York City, called ‘Super Mario Odyssey’. Looks interesting, but it releases in the Holiday season.

How about a new Mario Kart? It’s the deluxe edition of Wii U’s ‘8’, featuring a better battle mode, new characters/karts, and all of the previous Wii U DLC. Release date? April 28th…

What about Skyrim? The first 3rd-Party game to be shown off for the Switch back in October, and all that was talked about… Was its confirmation… The release date is… This Fall? What the heck?

Xenoblade Chronicles 2 will surely be great, on the heels of X… But there isn’t even a date for that beyond ‘2017’. We barely saw anything for Fire Emblem Warriors and the next Shin Megami Tensei, mainly because they are still very deep in development (SMI is still early in development). We’re also getting ANOTHER Street Fighter II (wouldn’t say that’s bad yet), but… nothing besides ‘2017’. Same for Minecraft, Steep, Dragon Ball, and Sonic Mania (should really be in the ‘Spring 2017’ area, unless it’s delayed).

What I’m trying to say here is that all of the big heavy hitters for the Switch isn’t releasing at launch (besides the obvious Zelda), most of which not even in the launch window. Not only that, but the price worries me; I get that it’s a “hybrid”, but it now has to compete with the PlayStation 4 and Xbox One. At $299, it truly cannot be weaker than the Xbox One in terms of power, especially when docked. I don’t want this to be another Wii U, but the event from last night has just gotten me worried. For Nintendo, this has to succeed, and I’m no longer as optimistic as I used to be.

The worst part is that most of the veteran franchises we already saw coming were mainly the only ones talked about. No Earthbound/Metroid/F-Zero. There seems to be a Fire Emblem Direct coming up, hopefully connected to Fire Emblem Warriors(!). No Super Mario Maker. No other ports of Wii U games. No mention of Virtual Console. Their online multiplayer will be a paid service beginning in the fall, featuring a NES/SNES VC “Rental” (You can only play it for free during that month, period. This is even if you are still subscribed to their service after the month ends.) 80 games are in development, so hopefully we get a better taste of them at this year’s E3.

The controllers are also a little expensive, with each Joy-Con being a whopping $50, and a pack is $80. Their good-looking Pro controller will be a shocking $70. The dock, which will also come with a HDMI cable and a USB Type-C AC Adapter, will cost a grand total of $90! That’s insane, in my opinion.

The good news? No region locking, Zelda looks better then ever, and it could have been more expensive. I will say that I was too hyped for this, but could you blame the onslaught of leaks that were releasing? It was expected for either Mario or Splatoon to be at launch (instead of Zelda). At the last minute, leaks say otherwise, and that’s what happened.

Zelda was expected to be delayed (from the rumors and leaks), but thankfully THAT got put at launch. It seems like without Zelda, this would have been (in my opinion) one of the most middle-end launch lineups in recent history. Considering that the 5 titles include Zelda, an (in my opinion) overpriced Joy-Con tech demo, 2 already released games, and a new Bomberman (surprised me the most… Bomberman returns!). This launch has me worried, because for Zelda, one can simply pick up a used Wii U. For 1-2-Switch, it feels like that should have been included with the system (It’ll cost $50? Really?) Those other 2 games (Just Dance and Skylanders) can be picked up anywhere else, maybe for cheaper. Bomberman is the only true exclusive releasing at launch, and that will account for some console sales indeed (considering it has been years since the last one). This is rather depressing to think about; I thought the original reason that the Switch would release in March was to have a better launch… I’m kind of worried that nothing would have released with the Switch back in November, hence the “better launch” this time around.

I still have faith in Nintendo, but they better have an incredible E3 2017 presentation to make up for this. They are about to have a lackluster launch (besides Zelda), and Microsoft’s ‘Project Scorpio’ also releases this holiday season. They are going to have to truly compete for the top spot this holiday season, even if they didn’t plan to. I may not get this at launch, but if their E3 conference this summer is good, I may still consider getting it for this year. It’s cool that FIFA and NBA 2K18 are on the way, but I shouldn’t be surprised about that.

For people that don’t own a Wii U, get hype for Zelda/Bomberman at launch. If you DO own a Wii U, I suggest waiting after launch to see how it goes (unless you want the best Zelda experience).

With the PS4 Pro as an interesting thing, that wasn’t that only thing I acquired for Christmas. I recently gained an interest in full-fledged voice control, and while the Google Home device was tempting… Amazon Echo had a much larger ecosystem already available, meaning more support was already there. I wouldn’t be surprised if Google Home eventually got more support, but for now… Let’s see how I felt about my new Amazon Echo.

Featuring an all-right speaker, this device that stays plugged in always listens to you for when you bring up it’s command, whether it’s Alexa/Amazon/Echo. Once it does, it processes whatever you say into Amazon’s Cloud, and produces a fully-voiced response right back to you. There’s no display/screen on this, but you can manage the Echo with your smartphone. You kind-of have to to actually use this, however. The stock functions include general question asking, making a to-do/shopping list, playing music through your select providers (Amazon, Spotify), and the obvious function of being able to buy stuff through Amazon’s Online Store. Don’t forget about being able to use this as a general Bluetooth speaker.

If the stock functionalities that the Amazon Echo comes with doesn’t please you enough however, it’s 1,400+ skills on Amazon’s Store could do so instead. With their “Anyware” campaign, it makes sense to see Domino’s have a “skill” for the Echo (Google Home also does, however). You can do the following with the added benefit of skills (personal recommendations):

How do I feel about it? Well, it is quite interesting to use this. When I was using it for the first time, it felt really weird. It was like how I used Google Now, but on a much higher level of artificial intelligence, speed, and use beyond the smartphone/tablet. While Google Now is useful when on the go and in need of a general search, Amazon Echo directly connects to only the cloud, meaning that specific functions get a large boost, while others simply disappear for obvious reasons. What I really like, that I however can’t use at the moment, is being able to really have this be the hub of your future smart home. Imagine simply saying to dim your lights instead of doing it manually. Imagine being able to _. This can all be done with the Amazon Echo. Yeah.

Would I suggest getting this? Well, if you have Amazon Prime, and can spare $180 for an extremely useful home gadget, I’d suggest checking this device out. If you don’t have that much money to put towards this, there are cheaper options available. These include the $120 Amazon Tap (Like Echo, but runs on a battery and has no always-on mic), or the $50 Amazon Echo Dot (extremely small speaker, but can directly connect to another speaker and have Alexa speak through it). The latter is especially useful if you already have a Bluetooth speaker.

What about against the Google Home? If you’re 100% devoted and fully in Google’s official ecosystem, I’d consider this more-so over the Amazon Echo. It’s generally cheaper (by about $50), and may eventually be more useful in the long term. If you’re about split though, I’d consider finding a direct comparison on how well these two currently stack up against each other.